Isocrates and the Philosophers: Review of Tarik Wareh, The Theory and Practice of Life

I recently reviewed for The Journal of Hellenic Studies Tarik Wareh's monograph The Theory and Practice of Life: Isocrates and the Philosophers (Cambridge, Mass. and London, 2012). The review is available in PDF here. From the review:


Wareh makes great progress by giving fuller consideration to the indispensible evidence of Aristotle’s Protrepticus, which has long been recognized as interrelated with Isocrates’ Antidosis, but has not yet been brought to bear on the reconstruction of Isocrates’ own educational methods and priorities, even by more recent scholars of Isocrates. We are only fairly lately beginning to profit greatly from the fortuitous 19th-century recovery of all of Isocrates’ Antidosis and part of Aristotle’s Protrepticus, as Wareh’s careful sifting of the evidence shows. And yet the Antidosis and its immediate context is crucial, since this is the work in which Isocrates defends his educational principles and conception of philosophy at greatest length, in part by attacking the abstract preoccupations and impracticable priorities of the Academy. Aristotle’s defence of theoretical and mathematical science as the heart and soul of philosophical education in the Protrepticus apparently went so far as to produce speeches against theoretical and mathematical philosophy in the voice of an Isocratean character which were then refuted by Aristotle in his own voice, an innovation in the dialogue genre and philosophical polemics that was embraced and imitated by Cicero in his own dialogues.

Posted by Monte Johnson at 11:00 AM No comments:

I just came across this image and autograph of one of the titans of twentieth-century Aristotle Studies: Ingemar Düring. Download our bibliography for details on his editions, translations, edited anthologies, and articles related to the Protrepticus. 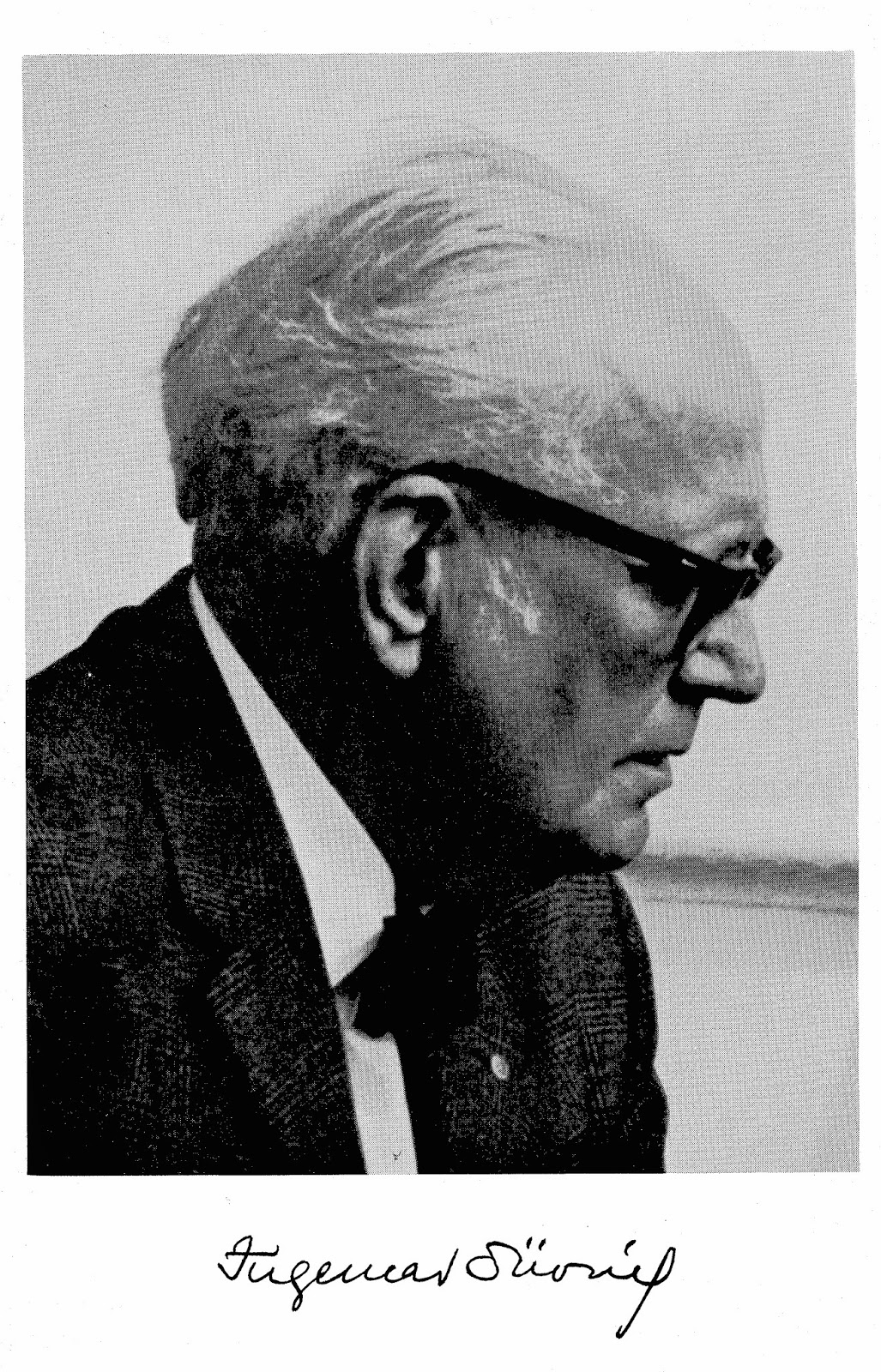 Email ThisBlogThis!Share to TwitterShare to FacebookShare to Pinterest
Labels: Düring

We hope to show that the overall protreptic plan of Aristotle's ethical writings is based on the plan he used in his published work Protrepticus (Exhortation to Philosophy), by highlighting those passages that primarily offer hortatory or protreptic motivation rather than dialectical argumentation and analysis, and by illustrating several ways that Aristotle adapts certain arguments and examples from his Protrepticus. In this essay we confine our attention to the books definitely attributable to the Nicomachean Ethics (thus excluding the common books).

The volume contains an abundance of good material, including a very useful bibliography by Thornton Lockwood as well as an essay by him on "Competing Ways of Life and Ring Composition (NE x 6-8)", an essay by Rachana Kamtekar on "The Relationship between Aristotle's Ethical and Political Discourses (NE x 9), and an essay by Lawrence Jost on "The Eudemian Ethics and Its Controversial Relationship to the Nicomachean Ethics". So readers of this volume can get a very good overview of the relationship of Aristotle's Nicomachean Ethics not only to the other works of practical philosophy in the Aristotle Corpus, but also to his most famous (and now fragmentary) popular work. There are 15 other essays on topical aspects of the work, by some of the leading scholars in the field. Check out the list of contributors and table of contents here at the Cambridge University Press (US) website.

Posted by Monte Johnson at 10:08 PM No comments:

From an article at Ekathimerini.com (here):

The Lyceum, located between the Officers Club, the Athens Conservatory and the Byzantine Museum on the junction between Rigillis Street and Vassileos Constantinou Avenue will be formally inaugurated later in the summer, but is currently open to visitors from 8 a.m. to 8 p.m. daily. Admission is free of charge. Aristotle’s Lyceum is believed to have been established as the ancient philosopher’s seat of learning in 335 BC.

Additional photos and information are available from the Ministry of Culture and Sports, which offers the following description:


The school of Aristotle, the Lykeion (Lyceum) (335 B.C.), one of the three oldest gymnasia in the city together with those of the Academy and Kynosarges, was situated on the outskirts of ancient Athens, outside the walls and the Gate of Diochares. As attested by ancient authors (Plutarch, Strabo, Pausanias), the Lykeion was a very extensive, verdant area between two rivers, the Eridanos to the north and the Illisos to the south, and beside the sanctuary of Lykeion (Lycian) Apollo and Herakles Pankrates. Athenian hoplites and ephebes, fulfilling their military duties, exercised in this idyllic area with its abundant waters.

For some inspiring recent comments on the lasting significance of Aristotle's school, see the recent Valedictory address by Professor David Sedley "Godlikeness" (link available at kenodoxia). The entire talk is brilliant and should be listened to; the discussion of Aristotle's school begins around 49:00.

Regarding the reported date 335BC for the founding the "Lyceum" as a school, one should keep in mind the skepticism, based on sifting the relevant literary evidence, of Ingmar Düring:


Aristotle and Theophrastus and the circle of scholars and students around them met and lectured in the Lyceum, a public gymnasium open to everybody, since long ago well known as a place where foreign sophists and teachers gave lectures. As the years passed the circle of collaborators and students probably became more closely united, but the Peripatos as a school in the same sense as the Academy was not established until after Aristotle's death. (Aristotle in the Ancient Biographical Tradition, Göteborg 1957, p.461)

Introduction to Iamblichus' Exhortation to Philosophy

On May 2, D. S. Hutchinson and I will make a keynote presentation to the Canadian Colloquium for Ancient Philosophy at the University of British Columbia. The abstract follows:

An Introduction to Iamblichus' Exhortation to Philosophy

The Exhortation to Philosophy of Iamblichus, composed in Apamea (in ancient Syria) in the early 4th c. AD, was a new kind of philosophical book, the first ‘textbook’ of ancient philosophy. Together with the other titles in his Pythagorean sequence, this book of Iamblichus is the first book of philosophy known to have been constructed by its author in chapters. It is also the first known book of philosophy whose sole purpose was to display citations from past philosophical writings by incorporating them into its own literary texture and commenting on them. In both respects it resembles a modern philosophy textbook. It is a difficult but very rewarding work.
In this talk we present an English translation of this work (nearly complete work-in-progress of ours), and demonstrate the structure, texture, capitulation, chapter headings, and literary devices of the work as a whole, starting with chapter I. Then we show in concrete terms how texts of Plato were cited, sometimes with alteration, in chapters XIII-XIX, quickly reviewing the conclusions of our 2005 OSAP article “Authenticating Aristotle’s Protrepticus”. We follow up now and confirm this analysis by studying ch. III, where Iamblichus cites from the Pythagorean Golden Verses.
At this point, we apply this analysis to chapters VI-XII, where the bulk of the evidence lies for Aristotle’s Protrepticus, as we showed in our OSAP article. Then we share our reconstruction-in-progress of the Protrepticus, showing the relationship between cover text and source text, as well as showing how we enlarged the evidence base by drawing in evidence from other chapters in another work of Iamblichus.
Now we return from Aristotle’s work to the Exhortation of Iamblichus. We briefly discuss the remaining chapters of his book, glancing at chapter II (gnomic maxims of unknown provenance), chapter IV (citations from the On Wisdom of Archytas of Tarentum, or ps.-Archytas), and chapter V (citations from Plato and then from a lost work of Aristotle).
We focus our closing comments on chapter XX, where Iamblichus has stitched together many citations from an important early author on education and political philosophy, originally identified in 1889 as Antiphon, but officially referred to as ‘Anonymous Iamblichi’. Many other attributions have been made, including the one most plausible to us, Protagoras of Abdera; but rather than try to solve that old open question, our plan is to establish a new basis of evidence. With our greater experience of the voice and literary texture of Iamblichus, we can now see that the old fragment collection in Diels/Kranz, on the basis of which all scholarship has proceeded, was not analyzed sufficiently and was over-inclusive: rather than there being 7 fragments, there are more like 25 fragments, with many intervening comments on the part of Iamblichus lodged (up to now) within ‘fragments’ of the Anonymous author, a confusion of data in the evidence base that may have tangled the scholarly discussion. We have also identified one further citation from this fascinating author, whose voice and lines of thought deserve to be better known.
Posted by Monte Johnson at 12:25 PM No comments: